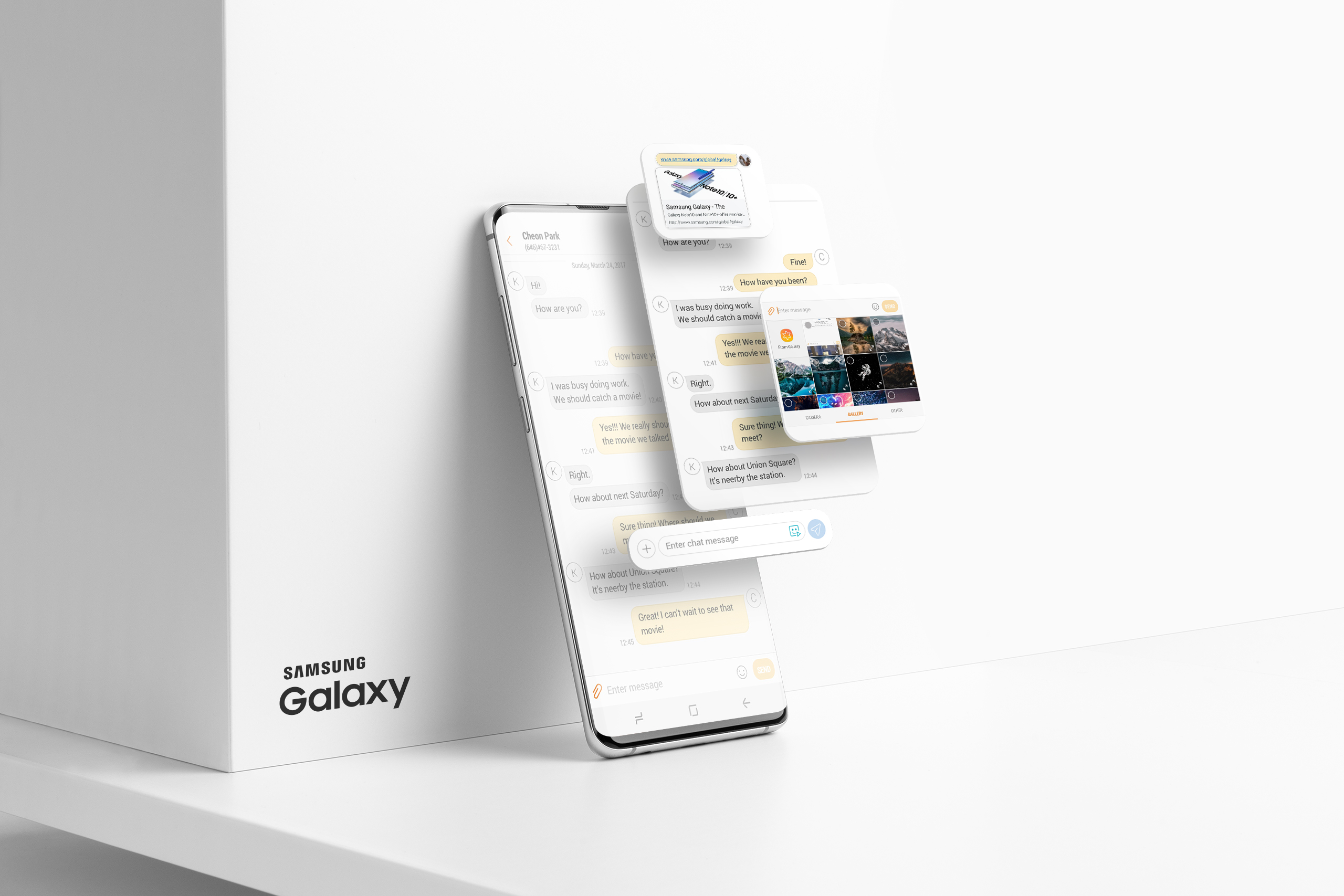 More than 1.3 billion people use Galaxy smartphones. And Messages has the highest usage rate of 95% among all Samsung applications, so designers tried hard to keep the product well-designed and innovative. But the messaging experience of a Galaxy remained conservative due to various restrictions and requirements. But over time, people have evolved the way that communicates from simple text to richer mediums, such as photos, videos, GIFs, weblinks, etc. We began working on a redesign of conversation experience to build a foundation for future scalability and provide a UX tailored for the rich messaging experience.

Due to security concerns with samsung, only an overview, and the high-fidelity images can be shared.

My full design process is outlined in the timeline below. Product planning, design iterations, verification, and design documentation are not shown for confidentiality purposes.

To explore the problem space, I conducted an analysis of a current experience to highlight underlying pain points.

Base on the log data and competitor analysis, I conducted problem analysis to find more specific problems and user pain points. Based on the findings, I was able to reach a consensus with PMs, engineering, and the research team and proceed with the project. 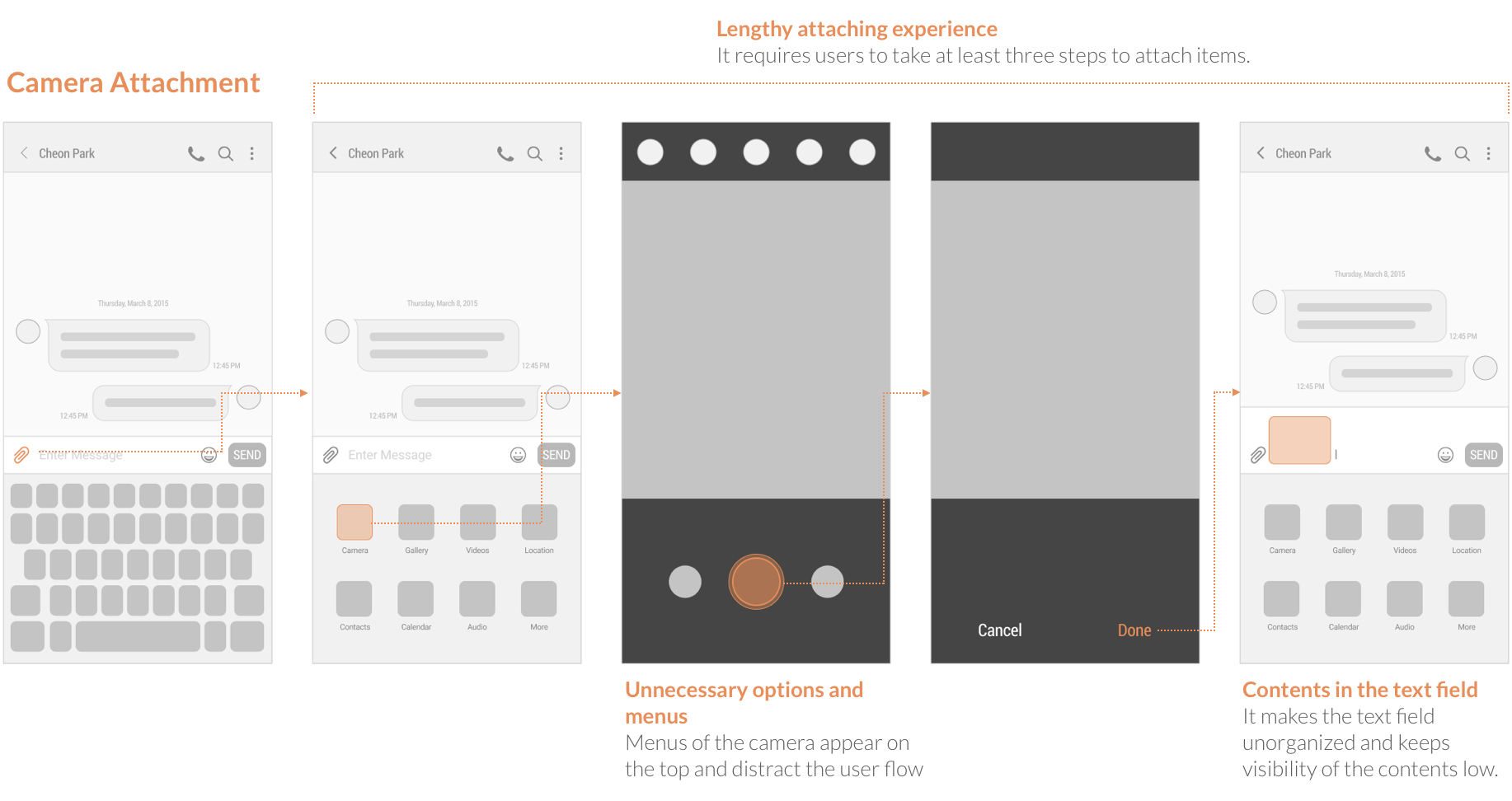 unable to check the context of messages 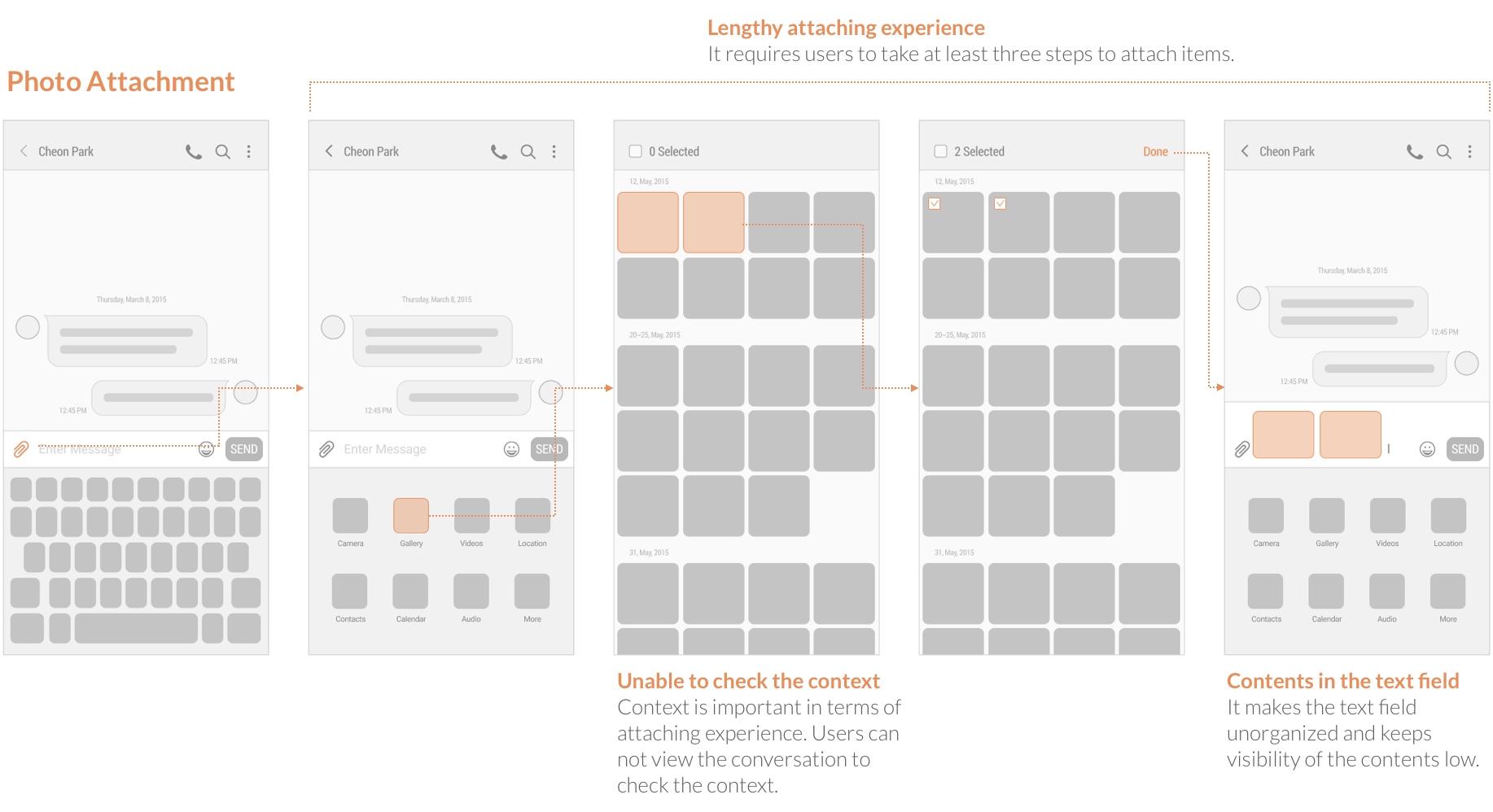 Same as Camera attaching experience, users go through a long journey to attach photos. Also, Contents were attached to the text input field, which makes creating message unorganized with low visibility of contents.

Messages provide various of attaching options. But the pop up appears and blocks the whole screen that makes them have a disconnected user flow. After the pop-up, jumping to other app provide users disconnection and delay the progress. 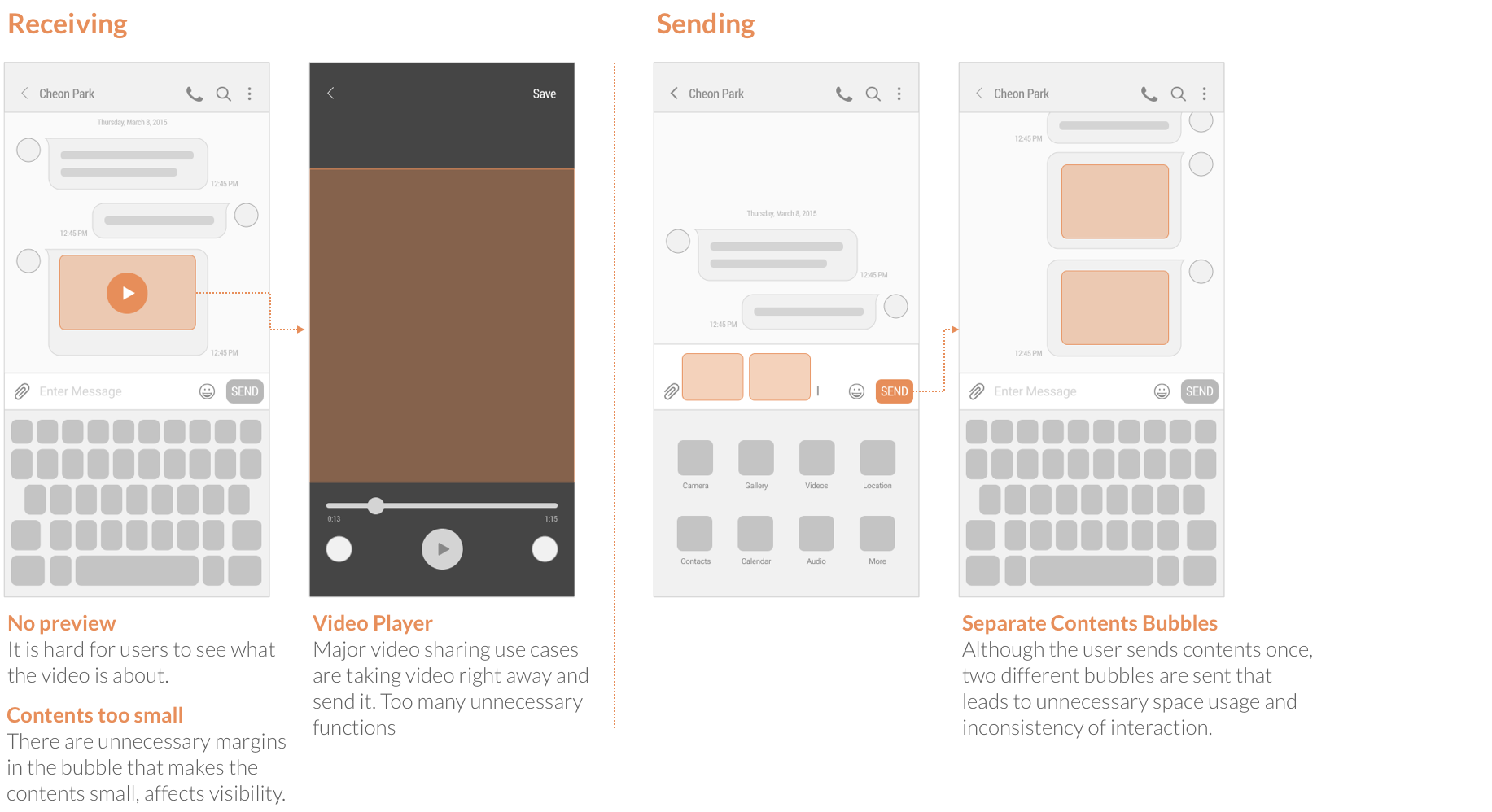 Based on user research, we found out that most of the users send videos or photos to share what they are currently experiencing, which means the only glimpse of a video/photo is necessary for usability. But low visibility due to the unnecessary margin in bubbles and no preview force them to open the detail view.
Also, when users send multiple photos, bubbles are separated so that it uses unnecessary space and inconsistency of interaction.

Unorganized / too many options on menu

Previous messages followed android's more option template. But as the menus accumulate as version upgrades, it added up without enough consideration, and therefore the menu tree was inconsistent and unorganized.

Based on my analysis and the research, I set seamlessness as the key problem areas I tackled during the design process. The others were usability and visibility.

The main problem was that users' workflow kept disconnected by switching the app, switching to the other screen, and pop-ups. In messenger, the context of a conversation is the key to making the user experience seamless. I set seamless experience as a priority goal and set the usability of features and visibility of contents and secondary.

Extensive Exploration for the possibility to enhance the experience

After setting the goals, I explored the various possibility. I had to find a way to both overcome the restriction and specification and boost usability. Below is the example of the overview of hero flow and some detailed workflow. 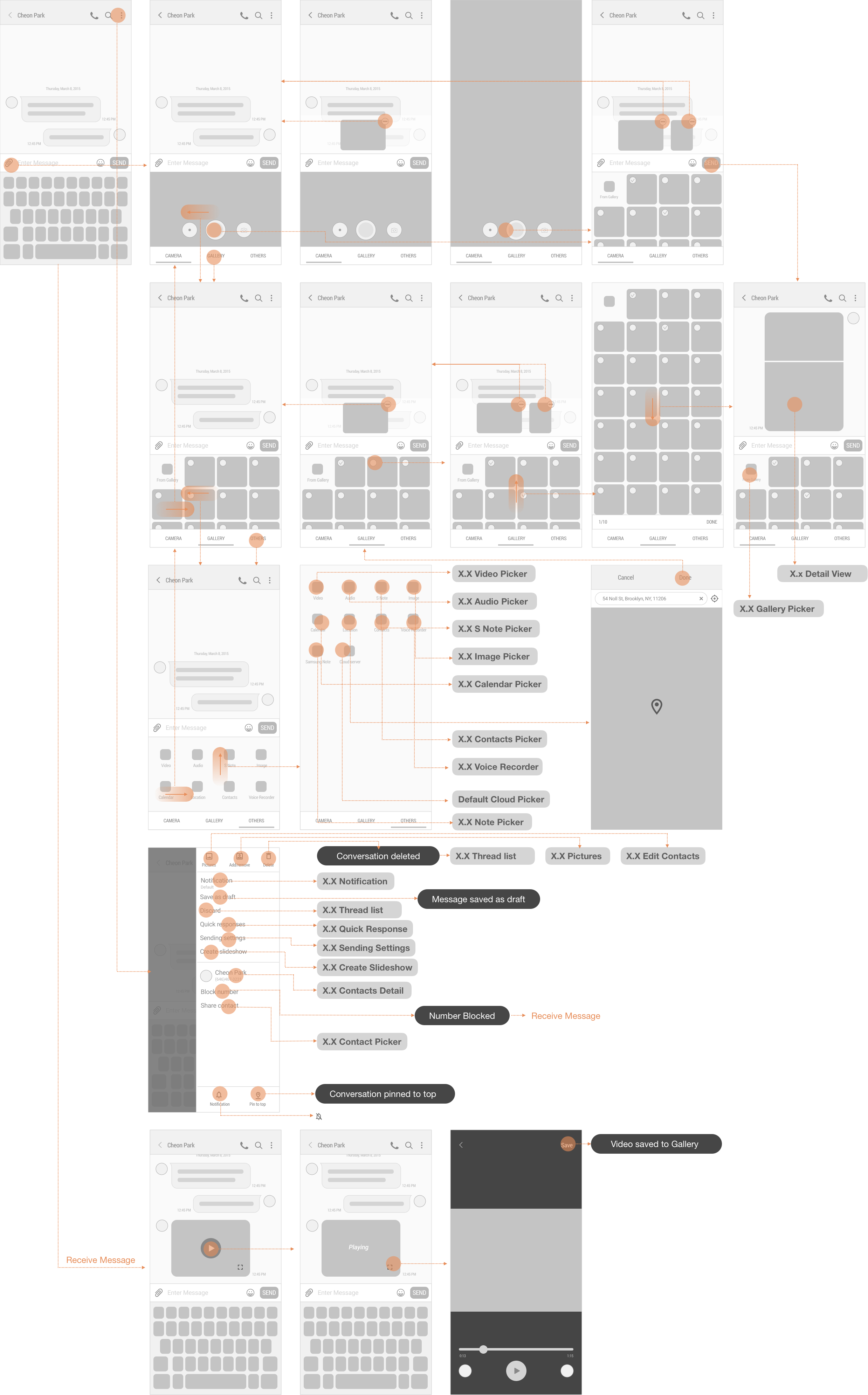 They loved the change. But a few changes had to be made. 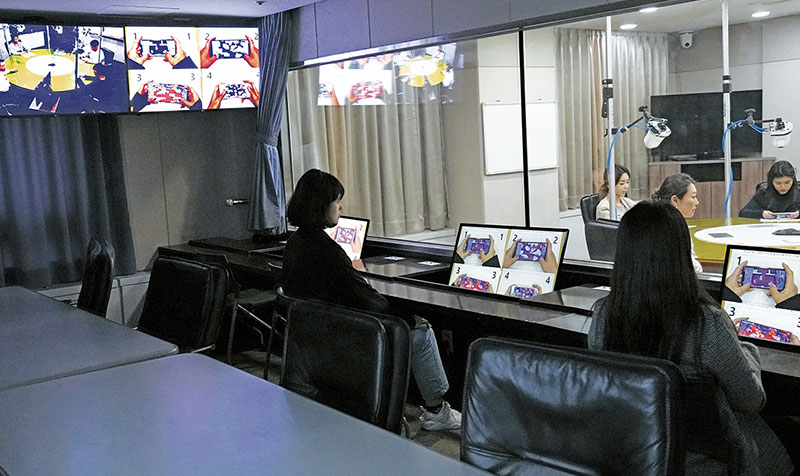 After exploration and drew some of the solutions, the research team and I collaborated with a research firm to conduct user testing. To plan, we gathered people in their 10 to 60 who owns a various type of smartphone and tested. The tasks were consisted of attaching photos, videos, and receiving messages. The test was conducted using a high fidelity prototype that I created. (The photo is to help you understanding)

"I want to have control on what I'm sending."

"I am scared to touch the photos because I'm worried if it sends directly right after I tap it."

"It took me a while to view the whole contents because there are no guides or button exists."

After the Usability Test, I directly worked on solving the problem and solidify the concept. We went through a thorough validation process and launched the product in 2017. Here are some of the interactions of the attachment redesign.

One of the main concerns about the final design was to provide seamless experience for attaching the top two attachment contents, attaching directly from camera and gallery. I successfully reduce two steps and familiarize by utilizing Android design system.

Based on the log data I researched, users mostly attach from Camera and Gallery. As a result, the step of attachment decreased from six to four. Also, users can see the context of the messages to figure out what to send.

In the previous version, contents were attached to the text field. I separated the attach area to the top to give more organized visual and distinguishability. Also, the user can change the camera ratio by simply swiping up so that they don't have to rotate the smartphone to take a vertical photo.

The previous version separates the bubble of each content even though they only send once. By emerging bubbles together and remove the margin between bubble and contents, I was able to retain visibility of both sending and receiving bubbles.

Based on the research, people share a video to share what's happening now. I collaborated with engineers by playing video when tapping the play button to provide immediate contents view.

I divided the menu into three-part that users can control conversation easily and also flexibly for future scalability.

Jumping apps made user flow disconnected and break the seamlessness of the user journey. I decided to integrate a simple web browser and provide fast task completion and seamless experience. 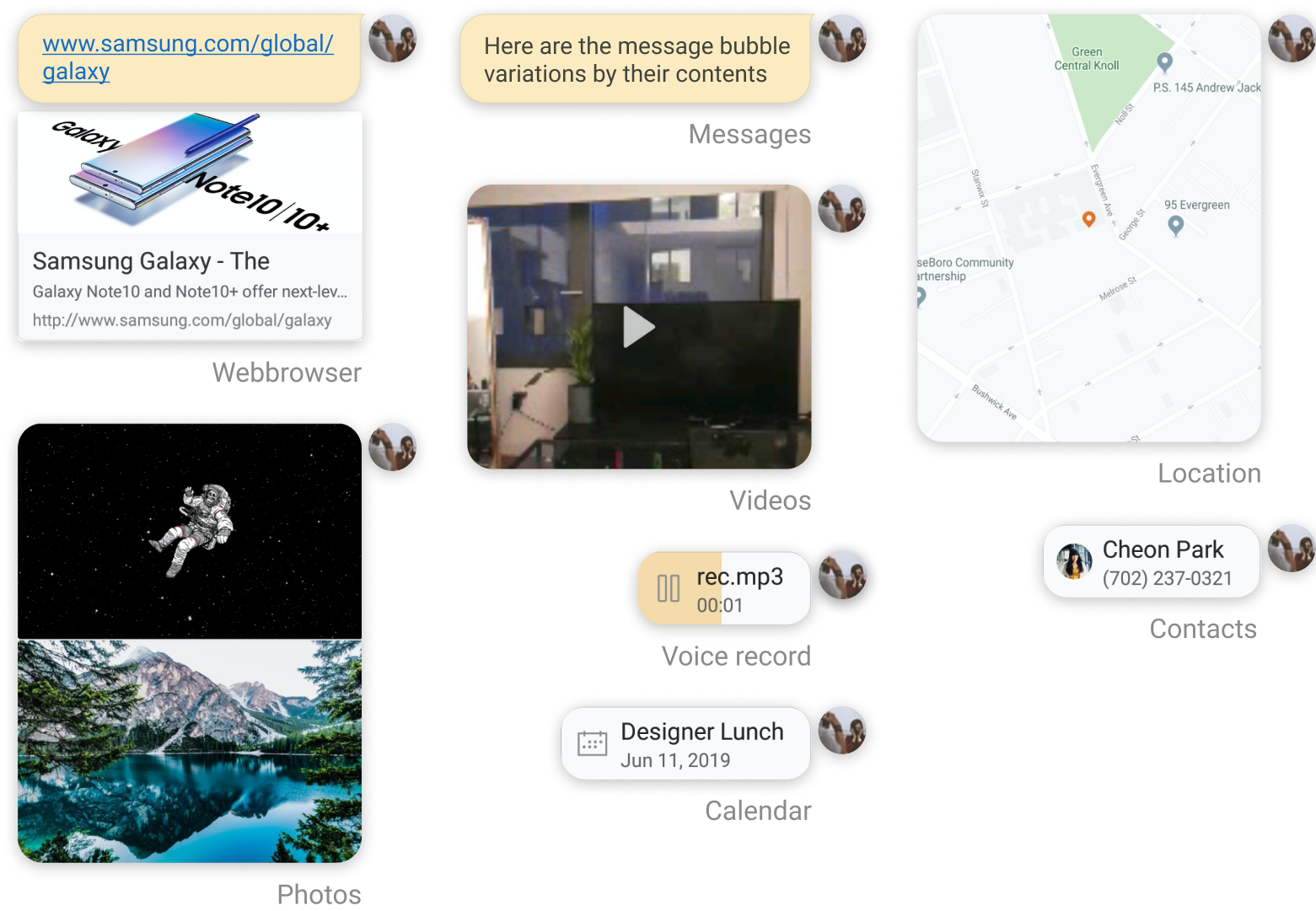 Previous bubbles had unnecessary margin so that visibility of the contents were low and looked unorganized. I redesigned every bubbles by contents type for consistency and contents visibility.

The usage of attaching contents  increased from around 3% to 12%

As users had more access to the contents, the usage rate increased due to the seamless experience of attaching. Also, we were able to unify UX of Enhanced messages which use the instant message as a messaging solution, and SMS/MMS. We built a foundation for future scalability to add on features.

My Experience as a Messages Designer

I was one of two designers who led the messaging experience for the Galaxy device. Since the app has its own unique UX and has the highest usage rate, I participated in most of the big company project as a pilot designer. I took charge of Galaxy S5 - 9, Galaxy Note 4 - 8, and Tablet models. Let me explain how the messaging experience of Galaxy devices evolved through each models.

I participated in the whole evolution of the user experience of every Galaxy messaging experience from 2014 to 2018.

Messages is one of the most basic features but also one of the most challenging applications to design in mobile phones. While GSMA (GSM Association) proposes technical standards to global mobile network operators, the specific specifications vary among different operators in the US, Europe, China, and else. As Samsung Mobile manufactures hundreds of different models every year, the company needs to unify different Messages UXs as much as possible among different specifications of different operators. Also, the software and UX need to be planned so that they are suitable for the unique UX of Galaxy.

I took charge of designing the original UX of the Messages app in Galaxy mobile phones based on the analysis and understanding the specifications. I worked on unifying messaging UX and created a system for Messages. I combined more than 10 diverse user experience into one unique UX of Messages.

The company planned to combine instant messaging with its messaging app to increase its competitiveness with iMessage. At that time, I had to come up with interactions that overcome both constrains of SMS/MMS and instant messaging. I came up with various solutions and unified the UX of both services. The structure and the system are now used by several careers worldwide. 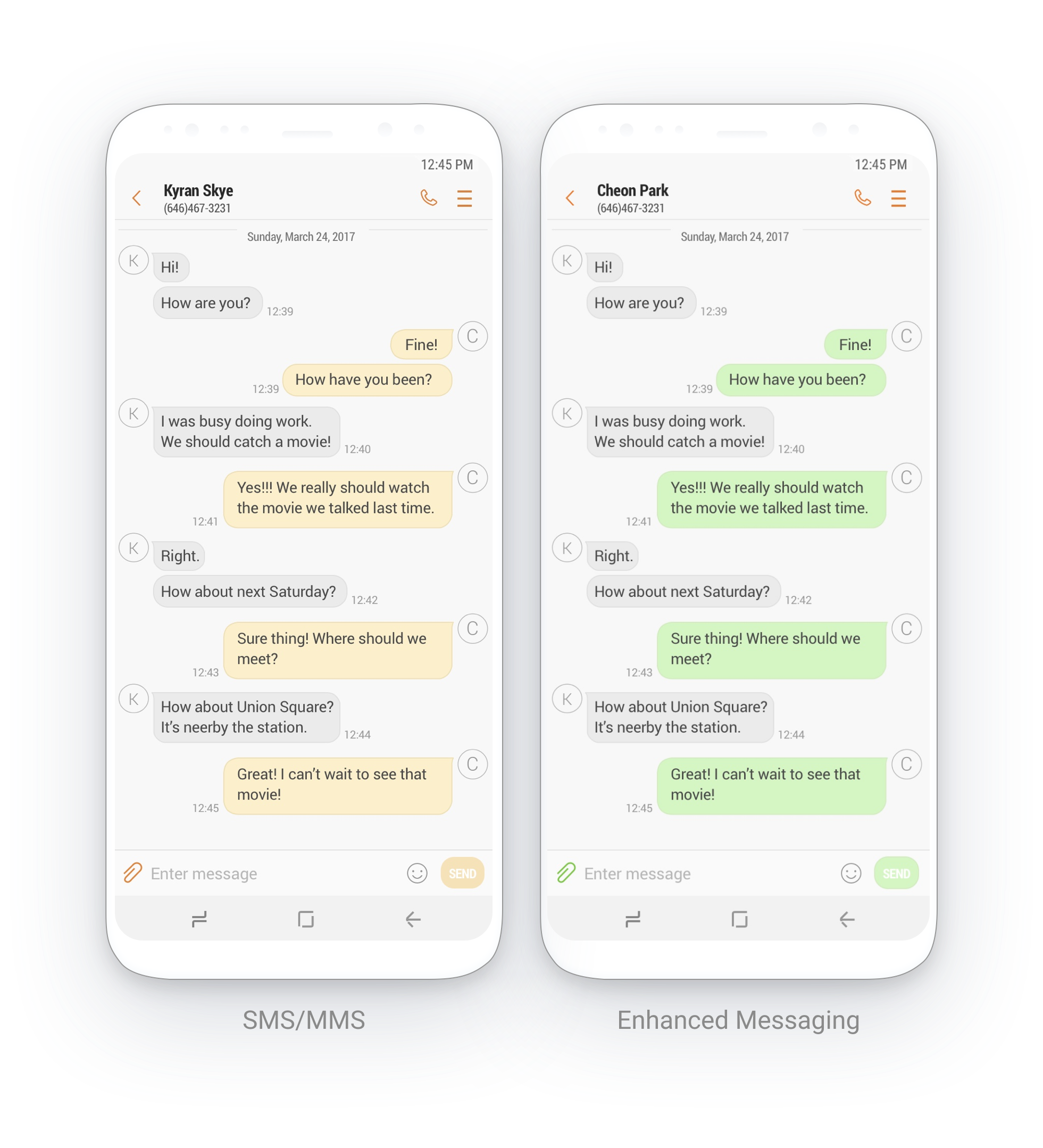 Enhanced Messaging
I combined Instant messaging service with SMS/MMS service and unified UX within one application.

The trend of the smartphone industry is equipping seemingly innovative features at random. This caused excessive functionality, poor performance, and bad user experience. I sorted out the functions by usage rate under 3%.  As a result, we improved performance speed by more than 20%, reduced more than half of the menu and setting items, made simple and intuitive usability of the product. 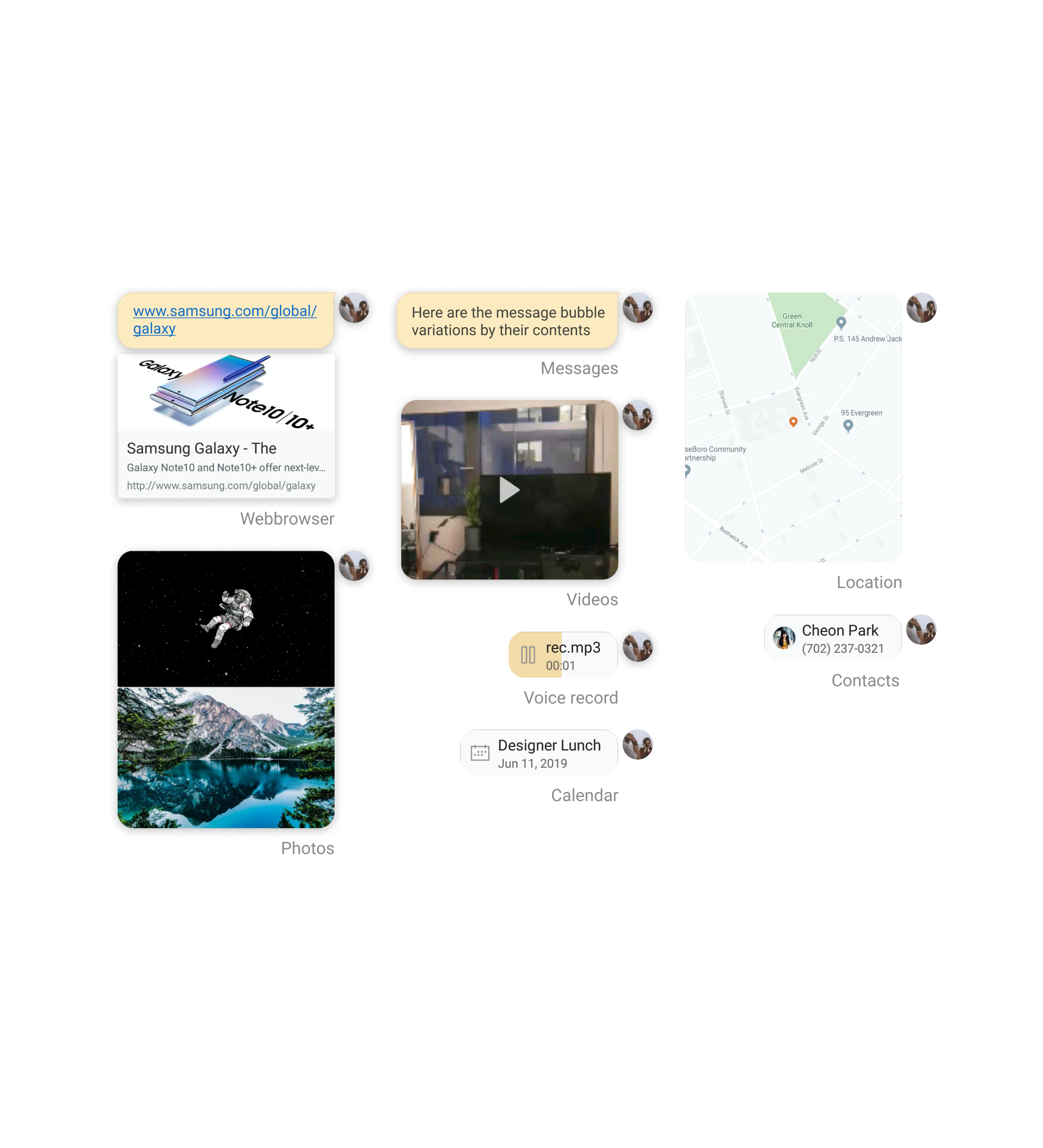 Bubble design
I explored for an effective and consistent way to contain different types of contents into a unified style of bubbles. 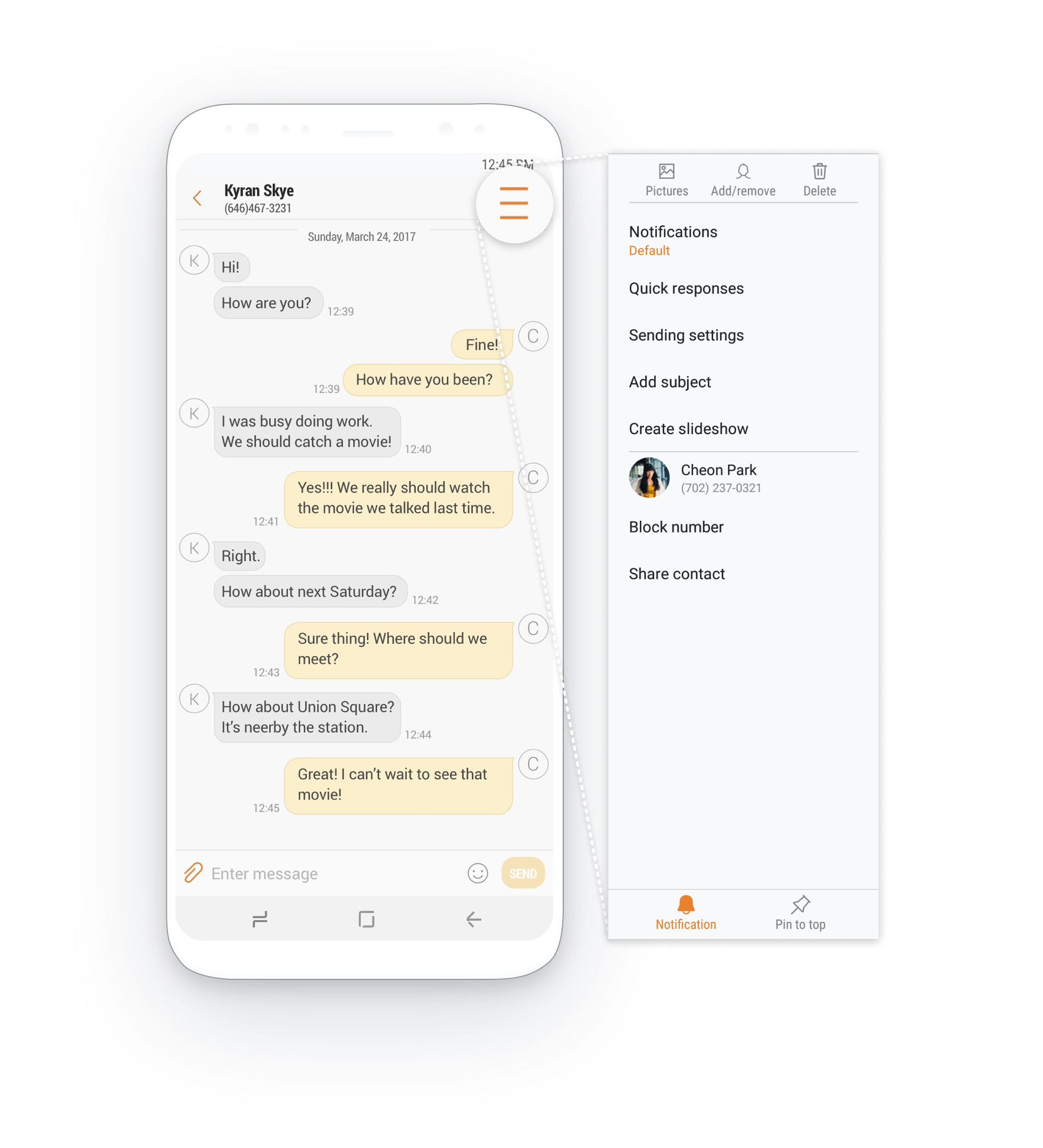 Conversation Menu
I designed a menu tailored for the messaging experience.

As the message's content type restrictions are lifted, people's behavior started to change. I started to design how to deliver multimedia easily and quickly. I simplified this process by integrating the gallery and web to the messages and reduced the attaching steps into half. 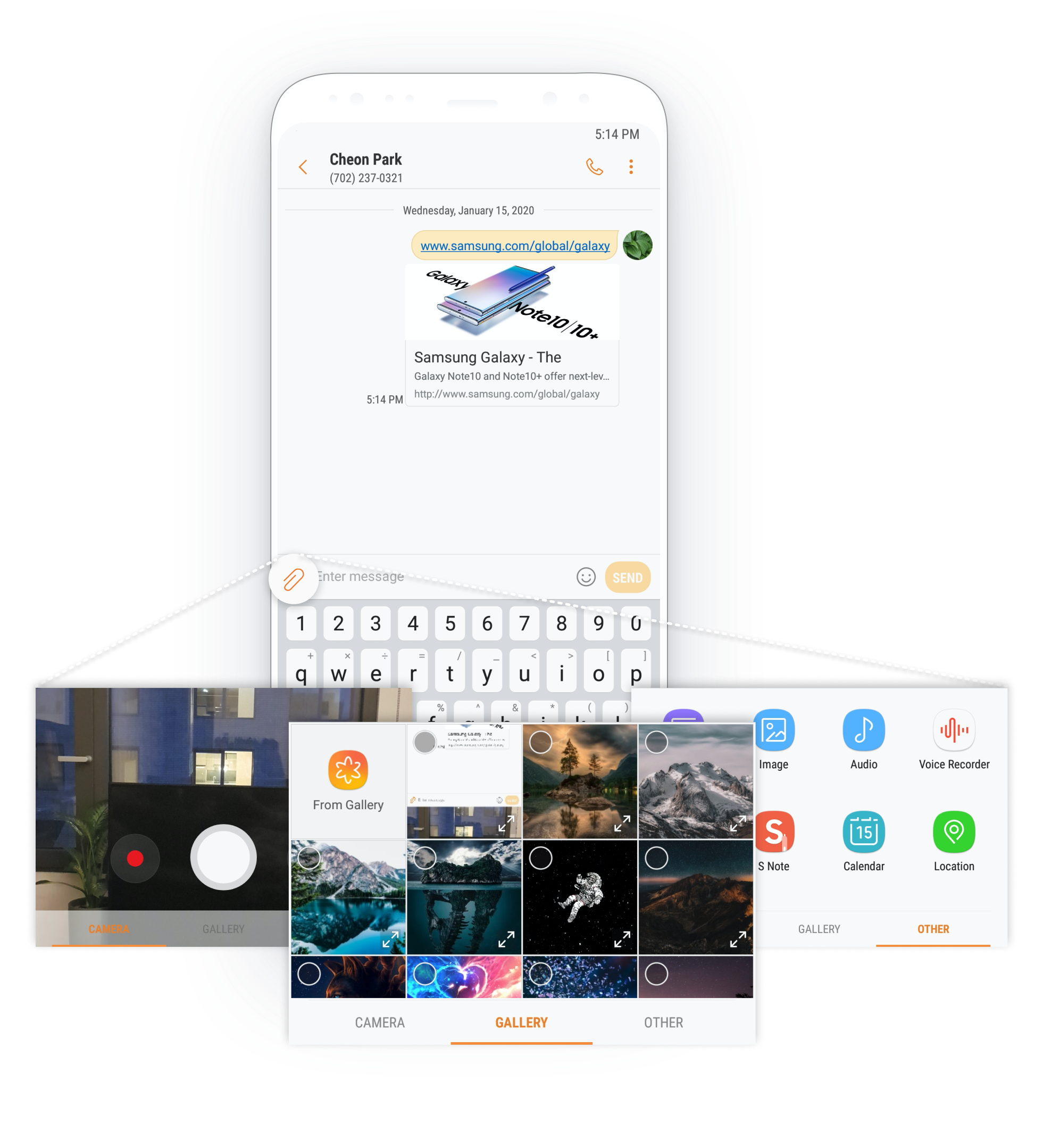 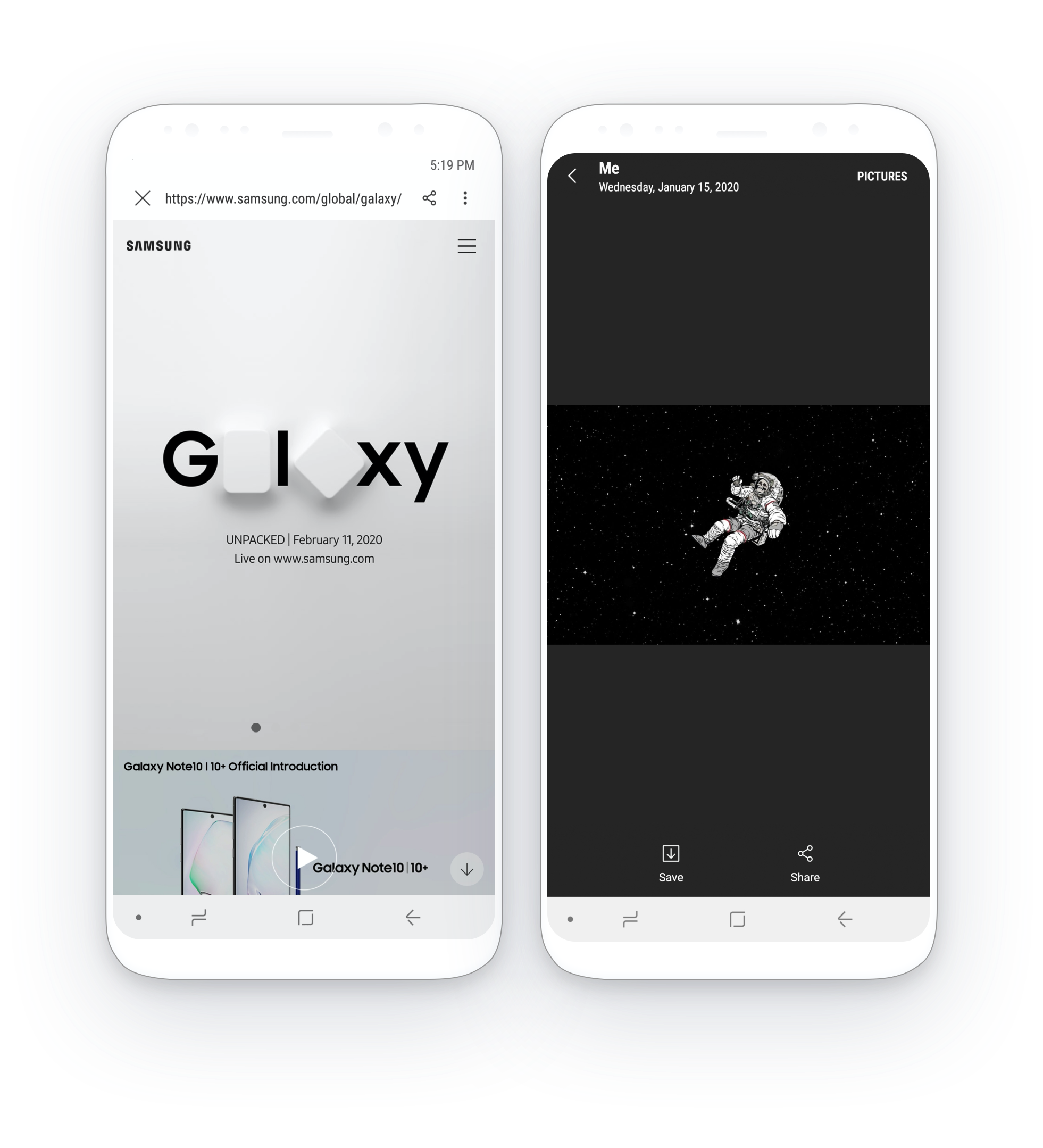 People were sending messages from various means. They were communicating not only by messages to messages, or mobile to mobile, but phone to tablet, laptop to tablet, or call to messages. We combined contacts for accessing calls, and messages from all apps, and also worked with Samsung Dex to provide a desktop experience on mobile. 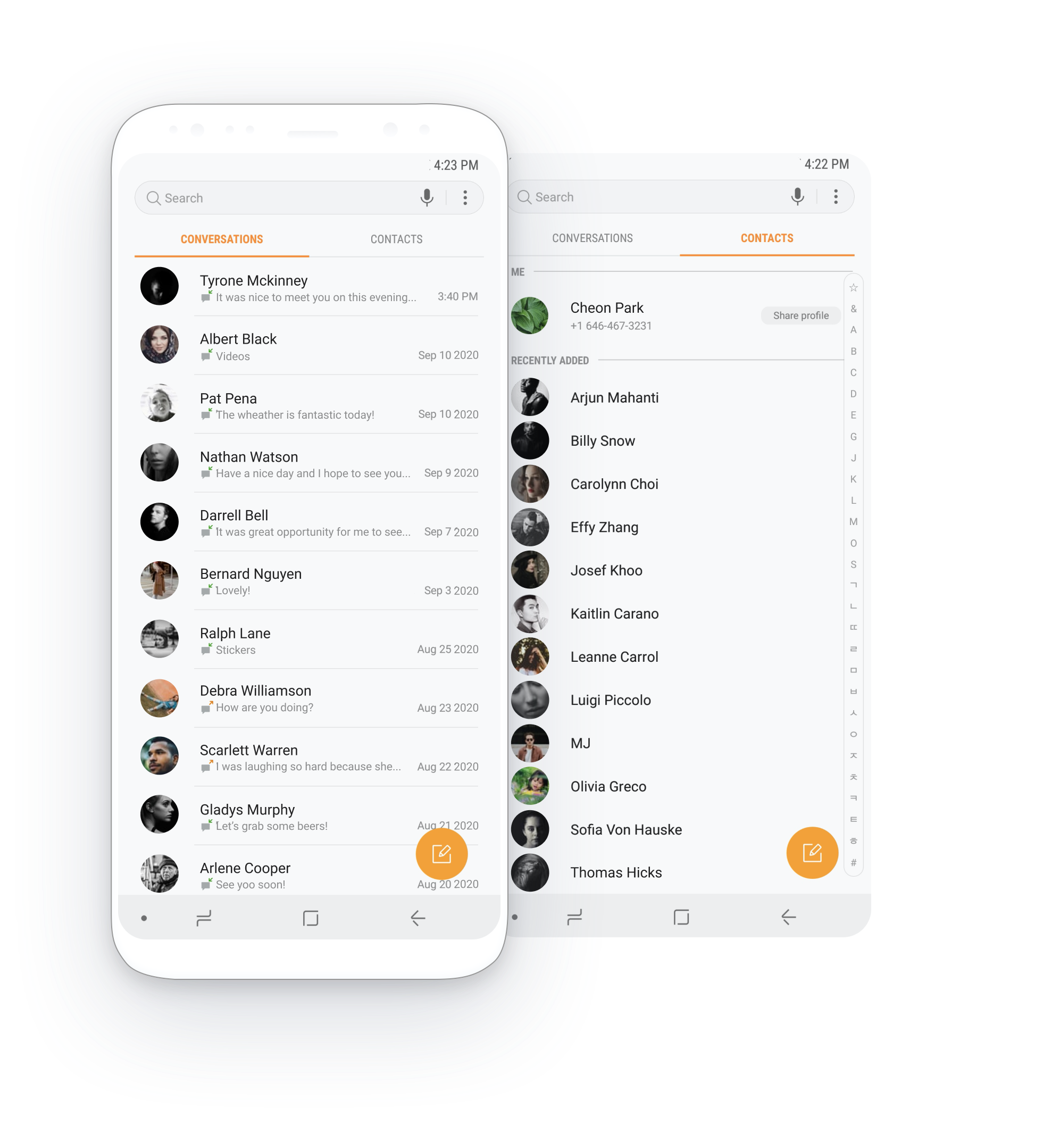 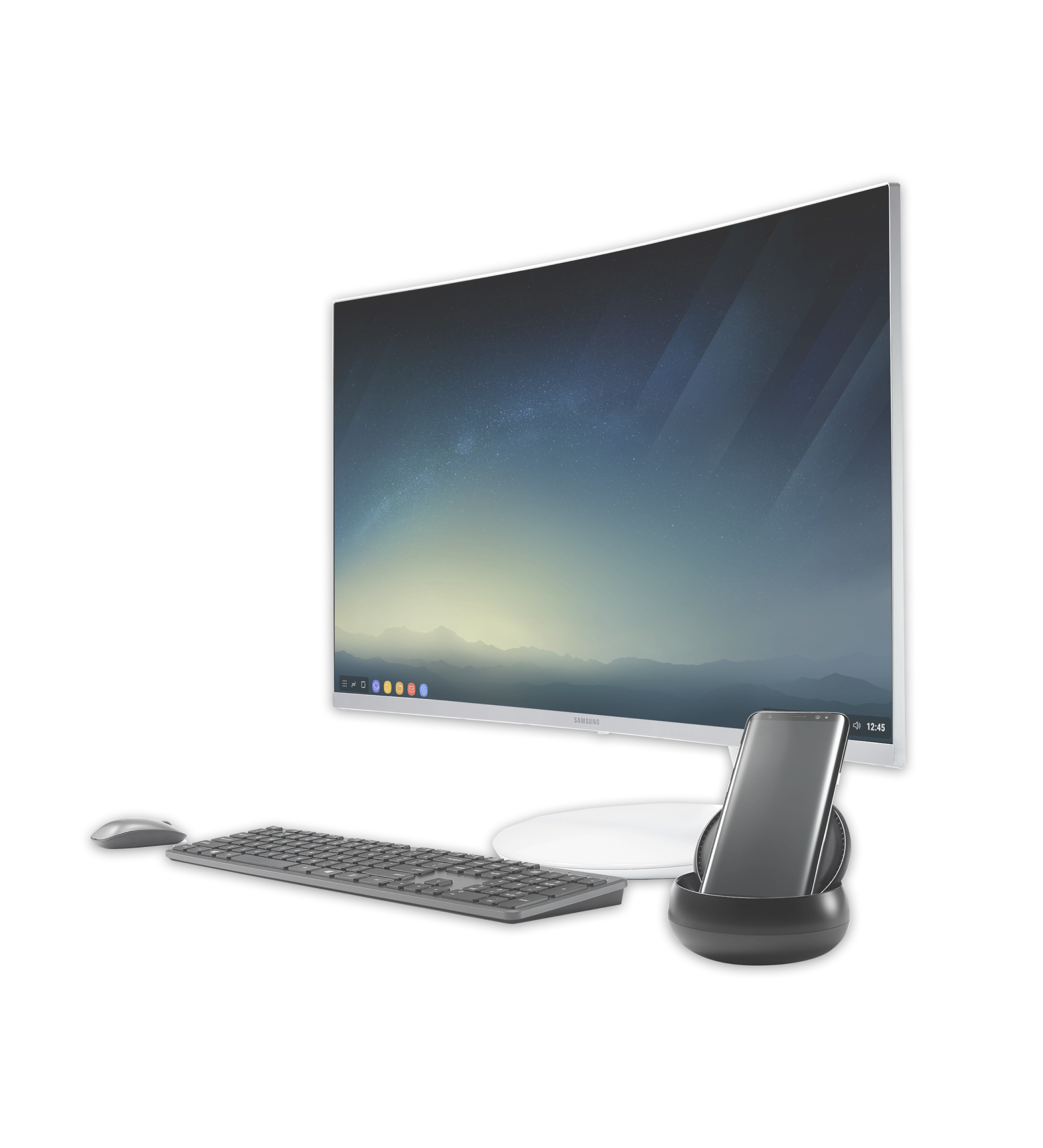 AI has also changed the shape of messages. Voice interaction systems were not perfect due to not enough affordance and hard to check the progress. I started to explore what benefits people from using chatbot and work on the template that can support various purpose that fulfills enterprise types. 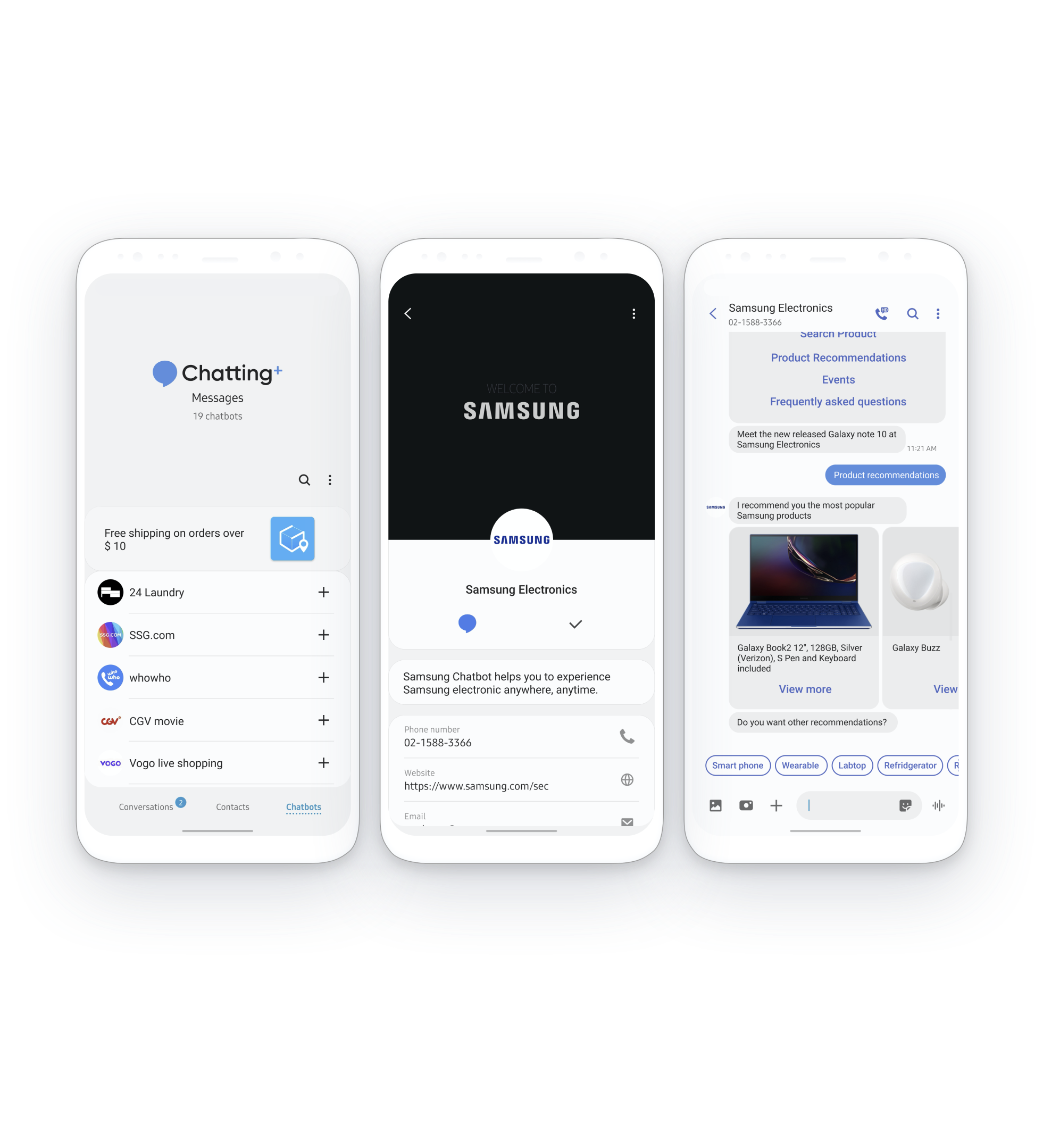